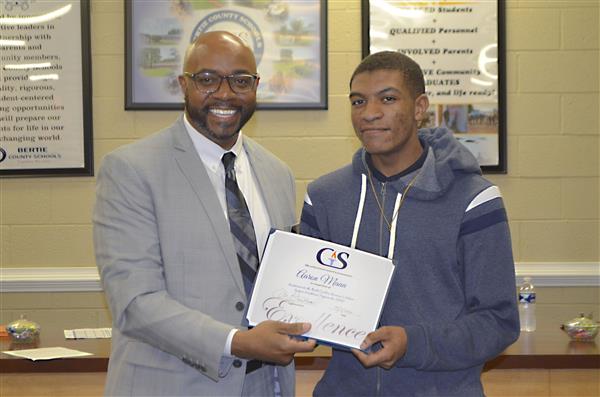 WINDSOR—The North Carolina Governor's School is a 5½-week summer residential program for gifted and talented high school students, integrating academic disciplines, the arts, and unique courses on each of two campuses. The curriculum focuses on the exploration of the most recent ideas and concepts in each discipline, and does not involve credit, tests, or grades.

Aaron Mann, a junior at Bertie High School, will represent our county this summer. He will be attending the West campus in High Point; his area of concentration will be English. He is the son of Lasharia and Nigel Hocutt of Powellsville.

Aaron plays the French Horn in Marching Band, is a member of the Bertie High School Robotics Team, Beta Club and is a National Honor Society inductee. He enjoys soccer, video games, hanging out with friends and reading. He loves mythology, and his favorite author is Rick Riordan, who penned the Percy Jackson series.

He wants to thank his guidance counselor, Tina Nelson, his principal, Antonio Hoggard, and his mother—all of whom “push him every day.”

“I appreciate all they have done for me,” said Aaron. “Without them, I wouldn’t have had the chance.”

He said further, “Not many people were qualified to apply, and since I was qualified, I wanted to try (to get accepted into Governor’s School) and see where it would go.”

Aaron believes that he was selected to apply because school leaders have seen that he is willing to go out of his comfort zone to try new things.

“When I found out I got in, it was almost unbelievable, to be the only one in the county,” he said. “I was excited and it was an amazing feeling—not only that I got in, but that it would be a positive light on Bertie High School.

“People are not used to seeing Bertie High School in the spotlight,” he said, “and that made me happy. I look forward to seeing what Governor’s School is like.”

If Aaron could have only one meal for the rest of his life, he said it would be fried pork chops with green beans and homemade macaroni and cheese. One little known fact about Aaron is that he does not like clowns!

The North Carolina Governor's School is the nation’s oldest statewide summer residential program for gifted high school students. The program, which is open to rising seniors only, with exceptions made for rising juniors in selected performing/visual arts areas, is located on two campuses of up to 335 students each: Governor's School West at High Point University in High Point, and Governor's School East at Meredith College in Raleigh. The program is administered by the Public Schools of North Carolina, the State Board of Education, and the Department of Public Instruction through the Exceptional Children Division. A Board of Governors, appointed by the State Board of Education, acts as an advisory body.

In compliance with Federal Law, Bertie County Schools administers all education programs, employment activities and admissions without discrimination against any person on the basis of gender, race, color, religion, national origin, age or disability. This website is in the process of being updated to ensure compliance with Section 504 of the Rehabilitation Act and Title II of the American with Disabilities Act.
Copyright © 2002-2020 Blackboard, Inc. All rights reserved.